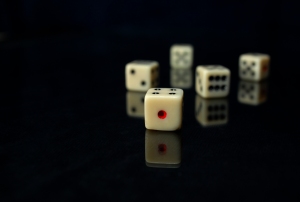 This week I’m taking part in an exercise with SPARK, an organization that pairs visual artists and writers so they may create work based on each others’ work. I was sent a .jpg file of a painting, which I will write a poem “about.” Although I have written a number of poems inspired by paintings by well-known artists such as Klimt and Matisse, this is my first time writing about artwork that I know nothing about, not even a title. And I realize that I don’t allow that kind of randomness into my art very often. I write about the same subjects, use the same kind of language and sound, follow a structural “template” that I’ve developed over time. I’ve developed a voice and style that I rarely deviate from; although these “work,” like the rest of life, they need to be balanced with newness and the element of chance.

Those who know me well know that I’m an MFA program dropout, by choice. But looking back, the best poems I wrote there were ones based on assigned exercises, ones that I even laughed at, at first. Like: Write a poem about your astrological sign. Write a poem from the persona of an animal… and so on.  This may be the value of such programs: they force you to stretch into directions you would otherwise resist, and help you to find the other voices behind your dominant one.

Some ideas to introduce randomness:

Form – Write a sonnet or villanelle if you’ve never written one; use rhyme or meter if you don’t typically use them.

Subject – Open a dictionary, Bible, or favorite book and pick the first noun on the page to write about. (My favorite book to do this with is David Brendan Hopes’ A Sense of the Morning.)

Word choice – Go to thesaurus.com and find five unrelated words you’ve never used in a poem. Use them.

Voice – Write a persona poem from the point of view of someone utterly unlike you.

I’ll pick one of these this week. Let me know if you have any other “randomness exercises” that work for you – either in writing, or in life!