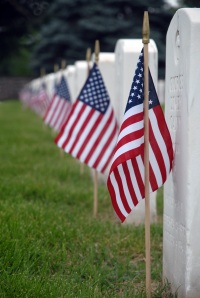 Today is Memorial Day, and in D.C. and the surrounding neighborhoods, we’re visited by groups of motorcyclists (Rolling Thunder) coming to honor fallen soldiers and veterans of the Vietnam War. People crowd on the highway overpasses with signs and flags, cheering on these men and women as they pass.

My father fought in World War II, in Iwo Jima, and though he survived, I often think of the horrors he witnessed, and how it is possible for any human being to return to the ordinary world afterward. My thanks go to all the soldiers who have protected us, and those who still protect us.

I love this excerpt of “Visiting the Wall” by Bob Hicok, which reflects on the atrocities of the Vietnam War:

A man wearing a beret

wheels up, leans near and fingers a name.

I remember being eight

the shocking switch from suburban twilight

whirring over the exotic menace I knew

as Vietnam, a man twitching

trying to keep what was inside

this marine and his fellows were also

no one should see,

of a bomb trip-wired to a baby,

skinned and hung from a tree.

On the losses that women have felt as their husbands and lovers were taken by war, no one says it better than Amy Lowell, in her poem “Patterns:”

In a month he would have been my husband.

In a month, here, underneath this lime,

We would have broke the pattern;

He as Colonel, I as Lady,

On this shady seat.

He had a whim

And I answered, “It shall be as you have said.”

Now he is dead.

In Summer and in Winter I shall walk

In my stiff, brocaded gown.

The squills and daffodils

Will give place to pillared roses, and to asters, and to snow.

And the softness of my body will be guarded from embrace

By each button, hook, and lace.

For the man who should loose me is dead,

Fighting with the Duke in Flanders,

In a pattern called a war.

Christ! What are patterns for?

One thought on “Poems for the Fallen Soldier”