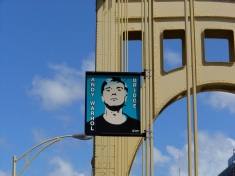 Jeff and I spent Memorial Day weekend sans kids in Pittsburgh. We decided that since east-bound beach traffic would be heavy, heading west was a good idea, and Pittsburgh is only about four hours from DC. So off we drove, in the stunned silence of burned-out parents of small children, into the real world.

Pittsburgh sits at the point where three rivers meet, and its historic bridges (446 of them!) define the city. We walked four miles the first day, just wandering, stopping for beer and fried oysters at the Original Oyster House, and ending up at the Penn Brewery for cheap, excellent microbrews and pierogi.

The next day, we were excited to visit the museum of Pittsburgh native Andy Warhol, which features not only his iconic artwork, but the many films he made and the TV specials he hosted in the early 1980’s. There was also a duplicate of his “Silver Clouds” installation from the 1960’s; basically, Mylar balloon “pillows” in a room, floating courtesy of wall-mounted fans. I imagine this would be great for kids, but the adults were having a lot of fun too. Most unique were his “oxidization paintings,” which were created by having friends urinate on a canvas coated with metallic paint. The colors varied according to the chemical contents of the urine; Warhol was said to be preferential to one of his assistant’s urine, which created especially vibrant colors.

We also took the short trip up the Monongahela Incline, which is still used for travel up and down Mt. Washington. The view is phenomenal:

We finished the day with friends, enjoying dinner at Soba and fireside hometown brews at Porch.

Here’s a favorite excerpt from Pittsburgh native poet Jack Gilbert’s “It Is Difficult to Speak of the Night,” which honors the new worlds we discover as we get older:

This is not the night of the young:
their simple midnight of fear.
This dark is a major nation.
I turn to it at forty
and find the night in flood.
Find the dark deployed in process.
Clotted in parts, in parts
flowing with lights.
The voices still keen of the divorce
we are born into.
But they are farther off,
and do not interest me.
I am forty, and it is different.
Suddenly in midpassage
I come into myself. I leaf
gigantically. An empire yields
unexpectedly: cities, summer forests,
satrapies, horses.
A solitude: an enormity.
Thank god.

2 thoughts on “Art and architecture in Pittsburgh”