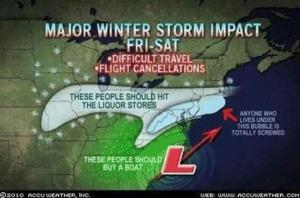 After a derecho this summer and another major storm just a month ago, we’re again preparing for what’s been dubbed “Frankenstorm,” a wide swath of rain and snow that’s likely to paralyze the East Coast for days. We’re charging our electronics, making tons of ice to keep refrigerator food cold, moving items in the basement to higher ground. On Friday I was at Target stocking up; the gallon water jugs were already sold out and the lines were long. I impulsively picked up two packages of brownie mix – perhaps if things get too Lord of the Flies, I can trade brownies for other items. 🙂

Shortly after we purchased our house in June 2006, we returned from a two-week family trip with a five-month-old in tow, to seventeen inches of water in our basement. We didn’t have a clue that the basement had any water issues (though we should have suspected by the presence of a sump pump), so it was somewhat traumatic. We didn’t really know where to start. We were lucky to be able to borrow a pump to get the water out to the curb, and were also lucky that due to a “sump pump failure” rider on our insurance policy, the damage was covered and we were able to restore the basement to better than new. The sixty-five year old wood basement door – literally blown off its hinges by the water – was replaced with a new steel door, and the whole basement was repainted. We put in a backup sump pump with battery backups, planted trees in the front yard to soak up water, and did a ton of drainage work in the yard.

Still, these storms are stressful – when the power goes out, the batteries give us only 16 hours of freedom, so after that, one of us is down in the basement with a bucket, watching the sump pump pit and emptying it each time it fills up. We take turns being on basement watch, one of us awake while the other sleeps. Add a couple of kids to the mix and it’s difficult. We just focus on the fact that even in the worst of storms, we have just a few days of fatigue and inconvenience, then life will be back to normal. But, is a horrific storm every month the “new normal?” We decided that our next home purchase will be a generator.

Today I’m thinking about H.D.’s long poem, “The Walls Do Not Fall,” about the bombing of London during World War II. In these lines, she hardens herself for the inevitable storm, making herself “indigestible” to that which would swallow her whole:

I sense my own limit,
my shell-jaws snap shut

at invasion of the limitless,
ocean-weight; infinite water

can not crack me, egg in egg-shell;
closed in, complete, immortal

full-circle, I know the pull
of the tide, the lull

as well as the moon;
the octopus-darkness

is powerless against
her cold immortality;

so I in my own way know
that the whale

can not digest me:
be firm in your own small, static, limited

orbit and the shark-jaws
of outer circumstances

will spit you forth:
be indigestible, hard, ungiving

so that, living within,
you beget, self-out-of-self,